Open Access platforms: Open Educational Resources, or something else?

Open Access (OA) resources are obviously different from Open Education Resources (OER). Open Access concerns itself with access only, or primarily, and less with the anarchistic/democratic remixing and repurposing that are key (though unpopular and underutilized) to Open Education Resources. With Open Access, the format (scholarly articles) tends to remain familiar, and “reuse” is limited largely to the traditional scholarly practice of citing each others’ works. The OA/OER distinction may fade as Open Access comes to include formats other than traditional research articles, especially the open distribution of raw data that subsequent researchers can pick up and use/repurpose in their own research, making Open Access content more mutable and far more powerful. But for now there is a fundamental difference between Open Access platforms (where software is usually closed, proprietary) and OERl platforms, which are more committed to open source at every level. There is only one (major) Open Access platform that is also OPEN SOURCE: DSpace, which is currently being used to host over 1,000 digital repositories.

Is there a difference between “open access” and “open educational resources” in users’ minds? Users want free authoritative content that is easily discovered, beyond school and even when they are in still school and enjoying institutional access—since traditional library platforms are not changing to meet evolving user expectations. In fact the SPARC (Scholarly Publishing and Academic Resources Coalition, a pro-OA coalition) chart below identifies traditional Open Access sources (either public domain or covered by CC BY licenses) as more open than traditional Open Education Resources covered by the CC SA (ShareAlike) or CC NC (noncommercial) licenses. 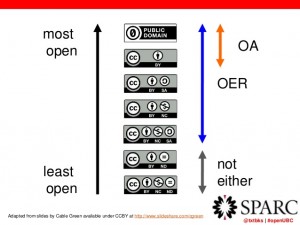 Open Access is understood as a moral stance, an inherent public good (personified by the tragic figure of Aaron Swartz). Why should the sum total of human knowledge be hidden behind pay walls, pay walls that get higher and higher every year? Isn’t it urgent for the future of humanity that we rip down these walls and democratize this information? But it’s also a phenomenon that scholars (especially American scholars), seeking prestige and “high impact” for their research (if not patents and corporate funding), still view uneasily. Individual scholars still personally benefit from the Faustian bargain of giving their copyright to major publishers like Elsevier, in exchange for the prestige bestowed by publication, much more than they do from not surrendering their copyright and self-archiving on open repositories. This is why Open Access policies beginning to emerge from American universities and/or their libraries all focus on the simple message that authors own copyright and exhorting scholars to, ideally, self-publish on a repository, but at the very least to negotiate with publishers to retain some right to self-archive and distribute openly. Barnard Library’s open access policy, published in November 2014, for example, promises to, “seek publishers that have adopted open access policies, publish contents online without restriction, and/or allow authors to self-archive their publications on the web.”

The two basic models for Open Access are “gold” and “green.” Gold open access entails publishing in an established open access journal, such as PubMed (NIH funded research must be published here) or Public Library of Science (a prestigious, peer-reviewed suite of journals where authors pay steep publication fees). Green open access is self-archiving. Most universities have an “institutional repository”— for example Columbia’s Academic Commons; or Bard’s Digital Commons— where universities vet and oversee content generated by their communities. (Adelphi does not have either a repository or an Open Access policy or statement.) The platforms themselves are proprietary (Academic Commons and Digital Commons are the main ones) and often very expensive to subscribe to and maintain; only DSpace is open access. Universities absorb these costs. Other green open access platforms include subject-oriented repositories like the massive science repository arXiv (maintained by Cornell, it hosts over 1,000,000 articles) or e-lis, an e-print repository for library research—which, it was pointed out at a recent OA conference, hardly anyone uses. If even library faculty are unwilling to self-archive their research on open access platforms (preferring more prestigious journals), how effective can we be at urging others to do so?

More broadly, Open Access is in such a state of flux that it’s poorly understood even by professional librarians. It’s easy to see how the recent and ongoing infusion of full-text, quality research to the open internet could contribute to information overload.

To learn more about Adelphi University’s online programs and download a brochure, fill out the fields below or call us at 888.252.4110 to talk with one of our enrollment counselors.

Are you enrolling from outside the U.S.? Click here.